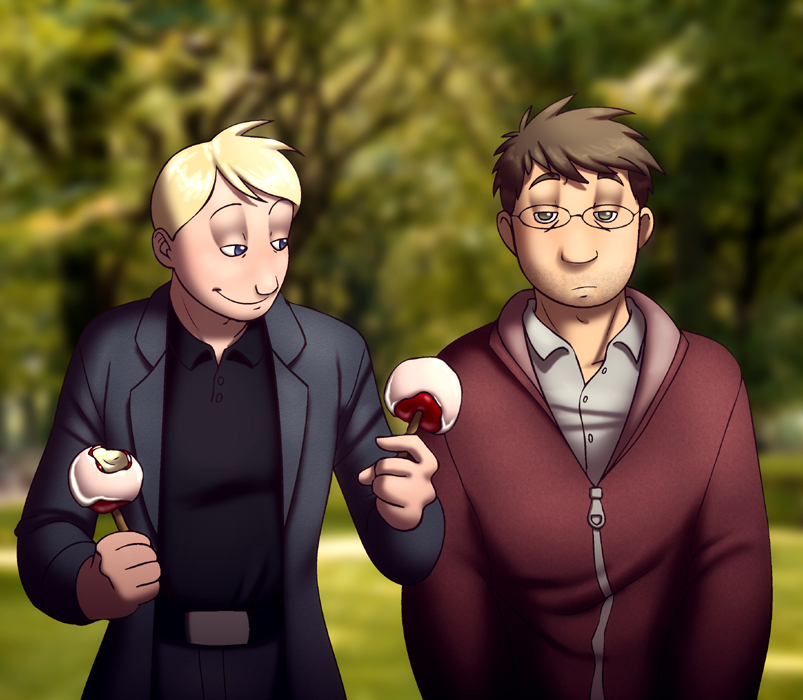 ”Why did you buy two? Please don’t say one of them is for me”

“It is. The big one even. I know how much you love them”

“No answer is an answer too”

Niels ruining Thomas’ trip to the park.
Their relationship is a little complicated.

Have you ever had a family member or a friend who you liked to wrestle? Someone who wasn’t really trying to hurt you but put some strength into it anyway, which made it so much more fun? That is how Niels see Thomas. Thomas wanted to put Niels in jail, and to someone like Niels who knows a guy or two who would happily torture him to death, jail is not a real threat (especially not when you can afford good lawyers). Sure, Thomas foiled some of Niels’ plans, but that was just like when your sibling/friend wrestles you to the ground “Okay, you win this time”. When he had to shoot a junkie to keep Thomas away, that was like when your wrestling partner gets too rough, and you have to punch them on the shoulder to make them stop.
So Niels became rather fond of Thomas and his games. When Thomas suddenly stopped chasing him, Niels got a little disappointed. He missed Thomas, so he started to seek him out. When he found out that Thomas wanted nothing to do with him, it just became even more fun to try and incorporate himself into Thomas’ life, or just pop up at random to mock Thomas for feeling like a failure. But even that is mostly an excuse to see how Thomas is doing. He will sometimes say that he wants Thomas to be his friend again, but that just means he miss the days when they played cat and mouse.

Thomas on his part used to hate Niels with a burning passion. He was idealistic and could not tolerate that someone like Niels could walk feely around.
After his wife died, he felt guilt for fighting for people he had never even met, while forgetting to take care of his own family. He realized that Niels had never done anything to hurt him personally, despite all the things Thomas had done to catch him, so he decided to leave Niels alone, and devote his time to his daughter.
These days he doesn’t exactly like Niels, but after chasing him for so many years he knows him well enough to not be too disturbed by Niels having an interest in him. There was so many times Niels could have killed him back in the old days, yet didn’t, so Thomas has no reason to think that Niels wants to hurt him now.
So he tolerates Niels, as long as he doesn’t get overly annoying. Sometimes he feels like punching him in the face, but the fear of ending up being obsessed with Niels again is too strong for Thomas to do anything serious about it.