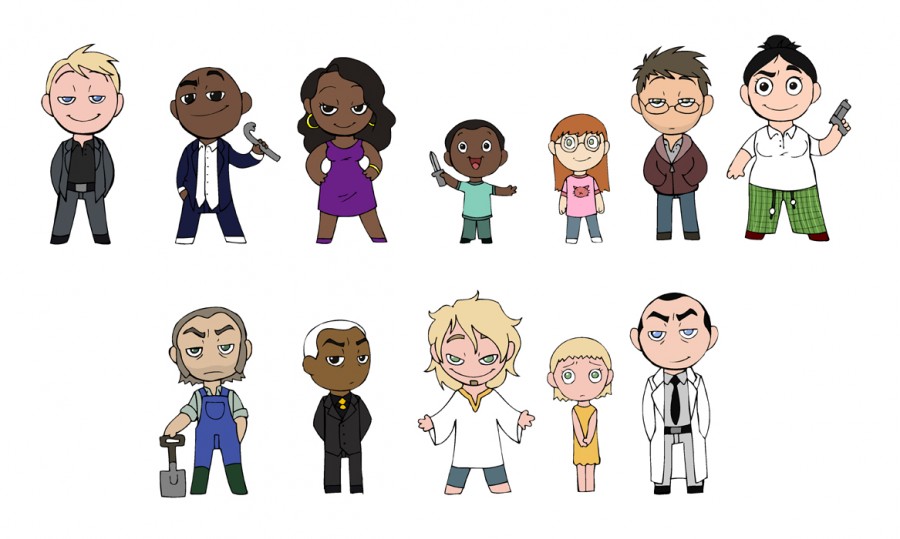 Here is a line-up of characters from the Niels universe. Some of them you know, others are completely new because I couldn’t figure out how to introduce them to you.

I have nothing intelligent to say about this picture, so instead I’ll use it to tell you about the characters, and give to some new info about the ones you already know.

From top left to bottom right:
Niels is a bit of a crime lord. He has two legal businesses; a warehouse and a recycling centre. The warehouse is where he has his office and meets business partners, both honest and criminal. The recycling centre is where the most shady business goes on, and the perfect place to get rid of bodies.
Niels has helped a lot of people to the top, and is so powerful that he doesn’t have to kill anyone. He has plenty of people to do that for him. But he wants to, so every now and then he will go out and do it himself.

Duncan is Niel’s lover and right hand man who has his own smaller office down the hall from Niels’. While Niels deals with the big shots, Duncan takes care of the smaller yet important things, like hiring people, making sure pushers/pimps/you name it leave the right percentage of their income, and either sends someone out to collect the money or do it himself if they’re cheating Niels. He used to be a robber, and to this day his favourite weapon is still a crowbar. He has a better feel for it than a gun, and knows where and how hard he can hit people without killing them (or how to kill them if that’s what he wants)

Natalie is Niels’ second lover and Duncan’s wife, and has never been involved in anything criminal other than covering for her men. She can be quite possessive of them, and worries a great deal about them when she hears that they’ve left the office to do business somewhere else.
You can read more about her and Duncan here http://humon.deviantart.com/art/Threeway-Wedding-138554285

Elliot (Kiddo) is Duncan and Natalie’s child. His always carries a toy knife with him (the kind where the blade goes into the handle when you stab something) that he got from Niels. When he gets older he will become quite skilful with blades.

Wendy is Thomas’ daughter and your normal everyday little girl. She loves all animals, even the ugly ones, and dreams of becoming a vet when she groves up.

Thomas is a police detective and formerly obsessed with capturing Niels. You can read his story here http://fav.me/d2bhp81
He hides his contact with Niels from Caron, because he knows she would use it to try and capture Niels, and Thomas doesn’t want any part of anything that has to do with Niels.

Caron is Thomas’ work partner, and in a quite frustrating situation. Her cousin was killed by one of Niels’ pushers, so she set out to catch him. But the guy went missing (Niels had him killed for shooting a cop for no good reason), so instead she turned her attention to Niels, and ended up being just as obsessed with bringing him down as Thomas was. She got the job as Thomas partner because she knew nobody knew more about Niels than him, but he doesn’t want to work on the case anymore, so she spends a lot of time trying to get him interested again. She is quite possible the biggest threat to Niels, because she doesn’t care if he goes to prison of if she’ll have to shoot him. She just wants him punished in some way.

Harold is in charge of the recycling centre, and has worked out the perfect way to turn a body to dust by using the various machines at the centre. He is the only white person Niels’ have given a high ranking job.

Hassan is one of Niels’ business partners, but they can’t stand each other, though they’re always polite about it. Hassan is very religious and is disgusted by Niels’ bisexual three-way relationship with Natalie and Duncan, and Niels is greatly annoyed by Hassan’s religiousness overall.

Peter was “Johnny’s first son”. You can read about him here http://humon.deviantart.com/art/Lil-Bro-wants-milk-142516953
He may look like a blond Jesus, but he doesn’t claim to the second coming of the Messiah. Instead he tells people that he is a prophet who will be the earthly father of the Messiah. His knowledge and understanding of the Bible is quite insufficient but when confronted with this he simply respond with “God talks to me, so I think I know better than you how to understand the Bible”.

Lidy is Peter’s oldest daughter, and according to him she will be the mother of the Messiah. That of course leaves her in a horrible situation, which she has no idea how to get out of.

“Johnny” was Niels’ former boss, and the person to teach Niels how to use a gun. Nobody knows where he came from, but he was obviously trying to hide his accent, and everybody knew Johnny wasn’t his real name. You can read more about him here http://humon.deviantart.com/art/Like-Father-Like-Son-139031402