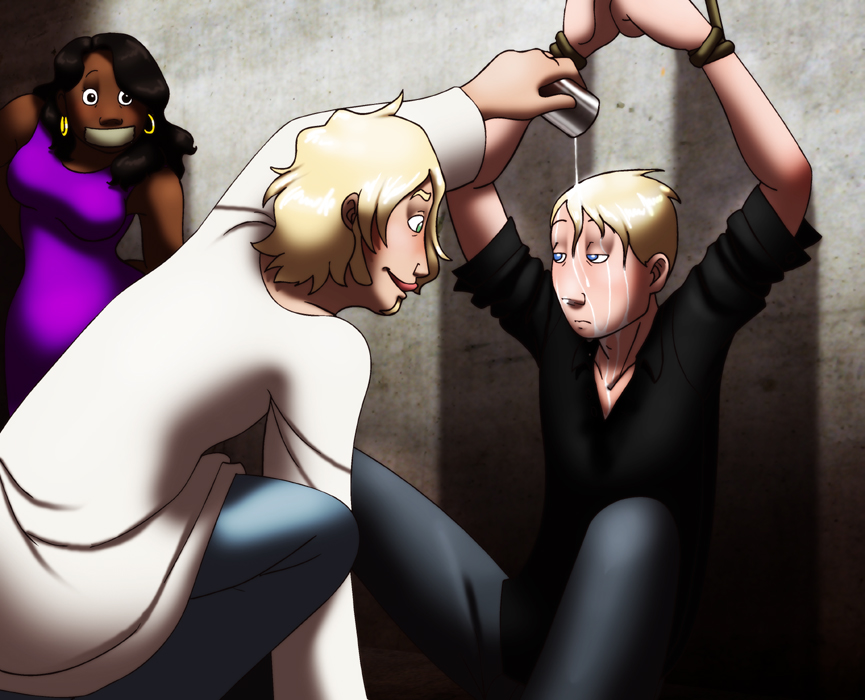 I didn’t really think about it when I made the picture, but it looks like Niels has been there longer than Natalie. She has a look on her face like she’s thinking, “Oh my god! Niels! You’re here?!”

Anyway, this is a character I originally created for the simple purpose of torturing Niels. You see, Niels does some horrible things, and in order for me to still like him I have to punish him every now and then.

But then I started giving the character a background and a personality, so I thought it would be in order to introduce you to him.

His name is Peter, and he is a hippie gone horribly, horribly wrong, a rapist with a big R and was “the first child of Johnny”.

Niels is always looking for parental figures, and Johnny was always subconsciously looking for a son. His first choice fell on Peter, who quite liked all the benefits of his new situation, but didn’t want to be anyone’s “son”. That wasn’t good enough for Johnny, so when Niels showed up, he quickly got Peter’s place. Peter didn’t mind all that much, because his time as Johnny’s favourite had gotten him a small following of people whom he provided with drugs and who was starting to see him as an almost religious leader.
When Niels killed Johnny and took over his place, Peter broke free and continued getting more followers, and eventually they moved into a farm.
As you can hear, he is more of a cult leader than anything, and at first he and Niels either worked nicely together, or made sure to never get in each other’s way.
But then one of Niels’ men disappeared after visiting Peter’s farm, and rumour had it that Peter had raped the guy and killed him when he realized he couldn’t let him go. From then on Peter and Niels’ relationship got more an more “chilly”.

Unlike Niels who never had any children of his own, Peter has quite a few, though he doesn’t know how many, and not all of the mothers did it willingly. But Peter has some screwed up ideas about love. Like Niels he believes that sex is love, and he loves everyone even if they won’t love him, because isn’t that the what love is all about? At least that’s what he tells his brainwashed drugged up followers. Truth is he probably just likes to rape people every now and then. And to make it even worse, some of the mothers are possibly his own daughters.

Also, he usually calls Niels “Brother” or “Lil’ Brother” and will refer to Johnny as “Daddy” when talking to Niels, all to mock Niels’ need for a family.