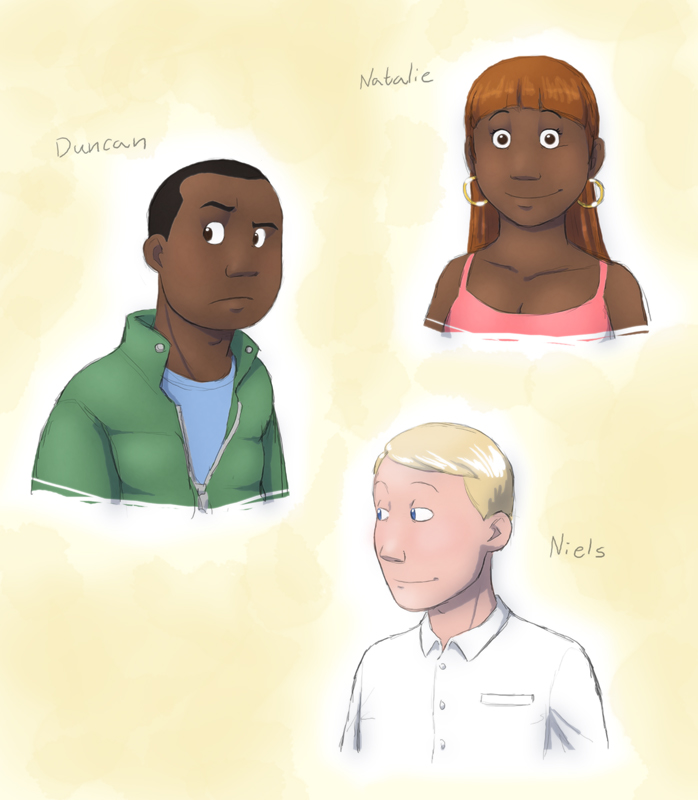 Duncan, Natalie and Niels as teenagers. I’m really just posting this as an excuse to give some background info on them, because people keep asking for it.

Natalie grew up in a poor but honest home. She was in no shortage of love from her parents, but they made sure she had a job long before she was legal. Because she never had any money, she was constantly fantasising about what she would do if she did, and she became very concerned with appearing richer than she was. She met Duncan while she worked at a diner, and she originally got interested in him because be gave her expensive presents (that he had stolen, but she decided to ignore that), but she quickly found out he was a nice guy too. Her parents knew Duncan and were not happy when they started dating. Even to this day he is not fully accepted by them.
She has had more different hairstyles than anyone care to count. This picture is from what her mother calls her “orange period” and like most of the hairstyles she had during her teen years, Natalie can’t stand to look at pictures of it today.

Duncan did not get an easy start in life. He never knew his father, and his mother died of drug use when he was six years old. He then got passed over to his uncle who only took him in so as not to appear bad in the local community. After that he never did anything for Duncan again. He already had five children, and only saw his sister’s kid as one more brat to spend money (he didn’t have) on. His dislike for Duncan rubbed off on his own children, so Duncan spent as much time away from home as possible, and ended up pretty much living on the street, where he quickly got into trouble because he had to steal to feed himself.
When he became a teenager he discovered to his horror that he “felt funny” around the other boys (He completely forgot that he liked girls too, because in his community there was no such thing a bisexuality. You were either straight or gay), and he freaked out. His friends and family were not exactly the type of people who would accept it, and he already felt like a worthless piece of shit nobody wanted, so this tore his world apart. It got so bad the he twice went to the top of tall buildings while drunk and almost jumped off. Then he met Natalie, and that literally saved his life. Because he loved her and she turned him on, so he couldn’t be a fag, right? For a long time everything was good. Whenever those bad thought returned he just quickly grabbed Natalie and assured himself that, yes, he still liked women.
But then he ended up in prison. Lots of showering with other men and no Natalie to hold onto. When he came out he got progressively angry with himself and more aggressive. Things would no doubt have ended badly if Niels hadn’t come along.

Niels grew up in a nice home, on a nice street, in a nice neighborhood, in a nice town. Both his parents were doctors so there was no shortage of money. The only thing they didn’t give their son was affection. His parents lead a very social life where appearance meant everything, so Niels was taught to smile an be polite from an early age, until he hardly had any personality of his own. When he got older he was either an excuse to hold parties or ignored. Problems where never discussed, so when he started showing a less than favourable behaviour towards other children, his parents pretty much just looked the other way as long as noting too bad happened.
He always knew he was bisexual, and never questioned it. At the age of 16 he slept with the black woman who lived down the street, but it was only when Niels went to America with a few friends that he finally dared to really live out some of the more “outrageous” things he always dreamed of. The first thing he did was go to a gay bar and find a black guy “to get started” with as he later put it. The next day he met Johnny who taught him how to use a gun and introduced him to the criminal world. The rest is history.