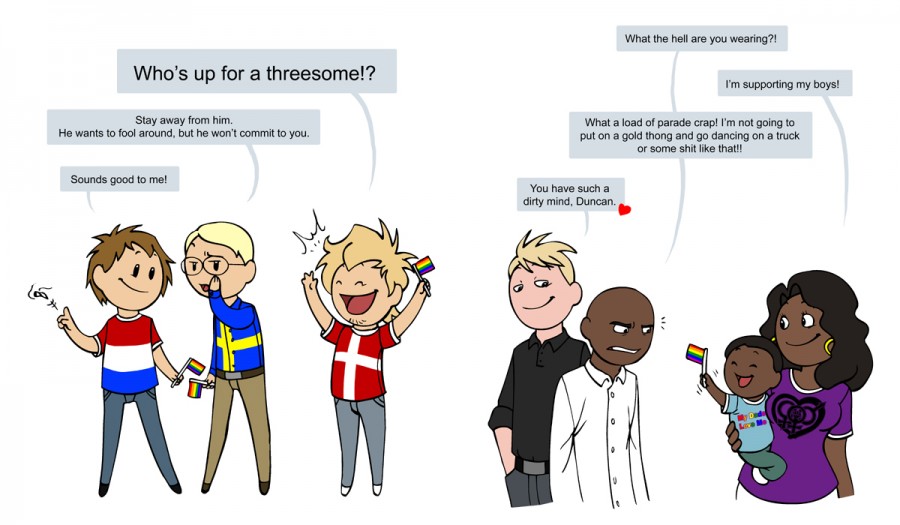 This was made for a friend of mine who is awfully worried about coming out. Show your pride honey!

But as usual there has to be a hidden joke and a bit of info in my SatW drawings. I read an article in a magazine about a study some students had made to find out what countries were the most gay friendly, not only legally (LGBT rights) but also the general public opinions about LGBT people, number of hate crimes, and such things. The top three were Netherlands, Sweden and Denmark on a third place despite not allowing homosexual church weddings, hens Sweden’s “He won’t marry you” line.
One part of the explanation was, “If you as a LGBT person wants to go on a vacation were you can show public affection for your partner and won’t have to answer questions when asking for one bed at the hotels, yet still wants to go sightseeing, these are the countries to go to”

The second picture is my answer to a question I got about whatever or not Niels, Duncan and Natalie had ever been to a gay pride parade. The answer being no, because Duncan would freak out if he saw a man with wings and pink fur undies within three meters of him and punch the first guy he met with a green wig on. What can I say? He’s okay with being bi, he just isn’t into the more flamboyant part of the community.

The gold thong on a truck is an inside joke, but I’m sure you guys will get it anyway if you've ever been to a pride parade or seen pictures. ;)

EDIT: Yes, they have legs. And yes, that is two female symbols on Natalie's shirt. Just think of it as her supporting Billy too as one of the "boys". ;p